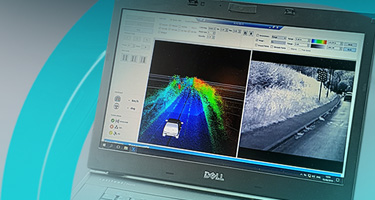 Overview
While there have been vast advancements in car safety over the recent years, motorways prove a difficult and potentially dangerous environment for vehicles travelling at speed. Additionally, traffic has been increasing more quickly on motorways than other roads in recent years, with 68 billion miles driven on motorways last year.

Motorway pile-ups are costly both financially and in terms of human lives. To tackle this issue, a £4.6m, 30-month project called MuCCA (Multi-Car Collision Avoidance) was conceived to explore semi-autonomous vehicles with improving safety as its core mission. Utilising the latest automotive technologies, such as AI and vehicle-to-vehicle communications, MuCCA will help cars and eventually autonomous vehicles to make co-operative decisions to avoid a potential accident.

Part of our contribution to this project, centres on our data logging and analysis mapping capabilities, honed over three decades in motorsport we have found applications for this technology in the wider automotive industry.

Challenge
Currently around 5,500 accidents happen per year on UK motorways alone, contributing to over 1,730 annual deaths and over 22,000 serious injuries on the roads. Incidents on the motorway network also cause delays and congestions, which can have a serious economic impact on UK businesses, costing around £21 billion a year according to recent estimates.

The overall aim of the MuCCA project is to build and deploy pre-emptive control systems that avoid collisions on motorways, however in the cases that an accident cannot be avoided, the MuCCA system will attempt to minimise its consequences (both injuries and damage).

The industry’s ambitious objectives are pushing technology to its limits, calling on Cosworth’s proven expertise as a leader in automotive technology. The plethora of data points involved in implementing, testing and refining such a solution mirrors the technical challenges that face fully autonomous cars: systems, machine learning, vehicle-to-vehicle communications and vehicle control systems.

Solution
The MuCCA project is striving to redefine road safety for cars of the future, and this multifaceted solution will include:

More on this project visit www.mucca-project.co.uk